ISLANDER is an idle crafting game inspired by games such as Forager and Minecraft. Use your pickaxe to mine any and all materials you can find, and craft your way off the islands.

Saving the game saves a large string to your Clipboard that you can then paste and load from the Main Menu on your next playthrough. This also allows you to share your saves with others so they can load your world if you give them your save data!

are u talking by yourself weirdo

dammit my game froze. i only had a sock worth of area left. 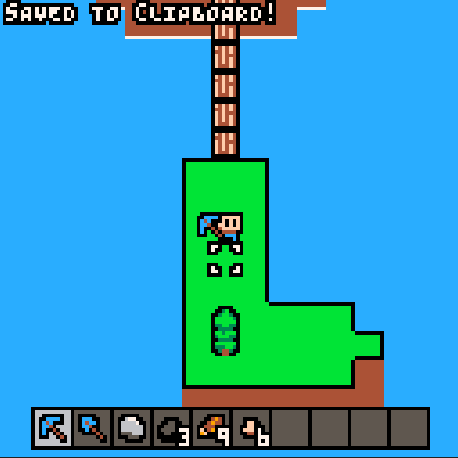 ignore the "saved to clipboard!" saving doesn't work for some reason.

down to 1 destroyable island left. i'm not destroying the spawn island, that's where my chests are.

i have officially filled a chest. 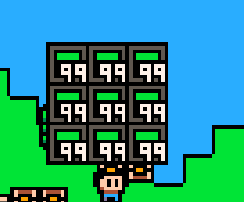 i've officially destroyed both the desert and... uh.... whatever the final biome is.

before i escape, i have decided to rip apart every single island except for the original one. and i shall leave everything in chests.

accidentally did something that froze it (not sure what it was tho ._.) aaaand i had to reload so i guess God didn't want me to rip apart some innocent islands.

actually i just had an even greater and funnier idea... WHAT IF I FILLED THE ENTIRE WORLD UP WITH GROUND BLOCKS

this is gonna take so much fricking time but by the end of it i shall have obtained C O M E D Y :> also it'll get easier as time goes on since flowers spawn in all 3 biomes, and the more area there is, the more flowers can spawn!

yeah this is taking too long, i'm just gonna rip apart the islands.

how do i craft or change wepons i neeed the controls

Hold X (on PCs) once you’ve started the game. A menu should appear, and then click one of the arrow keys to select something (e.g. Up Arrow Key for crafting, Left and Right Arrows for inventory select).

I really love this game since I’m a sucker for Forager-like video games. But there was a chest bug where when you make a second chest and try to put something inside, it duplicates what you selected and puts that into the chest instead (R.I.P. inventory organization).

Came back to the game to see if the previously reported bug(s) had been fixed (see my comments lower down about a year ago from this writing): The chest bug is detailed, and can be avoided by careful choosing of stacks and chests.

Sadly, there is no response from the developer, nor an update.

Cool game!
But in my Miyoo Mini (using Fake-08) I can't load my saved games :(
So everytime I want to play, I had to start from 0
The Load Game menu will only head to "Press Ctrl-V then press C/V" only which I can't do it on my Miyoo Mini.
Any advise? Thanks

Is there a way to save the web version so that android devices can play offline? It runs fine online, but I can't do a long hold on the "Run Game" link to download it manually.

Looks like a Foragers copy, but it's a good game. 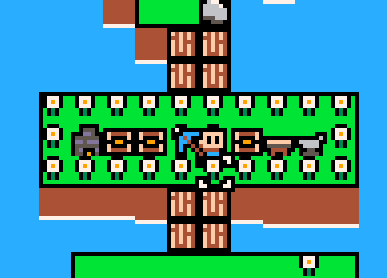 Wow! It's really an amazing game. I really like it.

Any time you try to merge multiple stacks (via the Chest), if you select the second or later stack, the game will put/remove the items from the first stack it finds instead of the selected stack (using the count of the selected stack). Done right, it will put/remove the items without changing the stack count, allowing the player to infinitely duplicate any (stackable) items. (I figured this out when I ended up with so much inventory I could not even craft a new chest to hold all my items and had to restart my game--which leads me to the next bug....)

When saving/loading, it loses a lot of information about items placed on the map. In particular, anything to the left of the player on the same row is lost. Likewise, anything above the player is also lost. It is as if the game treats the players position as the start row/column, and loses anything prior. I am now in the habit of always moving to highest leftmost position before saving (I actually used bridges and dirt ground to ensure there is a spot that always comes before any other).

(3) Not really a bug, but a game play issue (and what led me to uncover the previous bugs):

Sitting idle for a long period of time generates so many resources that it becomes impossible to move or harvest/mine them all without inventory overload. I suggest two things: First, limit how many of each resource it will auto-generate. Second, add the ability to trash/destroy items not needed. I ended up expanding one island to a full screen size covered with chests filled will resources I had no use for.

I did it accidentally and its so annoying

for some reason it is possible to infinitely dupe stone in a chest, may be possible with other items. this is done by trying to take it out: while there is stone added to my inventory, the original stone in the chest remains. destroying the chest fixes this issue.

on a perhaps related note, it seems that maximum sizes of stacks are jank

EDIT: it actually seems that this works if you have an item in your inventory AND in the chest.

i can't start the game

tits a great game but the controls are weird

i found a dupe Bug XDDDDDDDDDDD

I think I found another dupe glitch, for now only works for coal

I broke the game, the dupe glitch is now stuck in my inventory will download obs to show if it's still works after

I beat the game it took like four or five hours this game amazing the ending on amazing however the boat is a bit OP to get that’s what took the longest so yeah amazing game I made two videos of all of it on my YouTube channel not all of it but some of it and I just beat the game amazing game you did and you did a epic job on us and I would highly suggest like doing like add-ons or different versions of the games like different add-ons for more furthermore like worlds.

Can you add more stuff? this game is pretty good, but when I finished the game, it's kinda boring. Also what does "New Game+" Mean?

can you make a android or apk version

Unfortunately not, but you can play on mobile here on itch or on newgrounds: https://www.newgrounds.com/portal/view/764760

can you add a download of the wave sfx?

i finish the game he's so cool ! 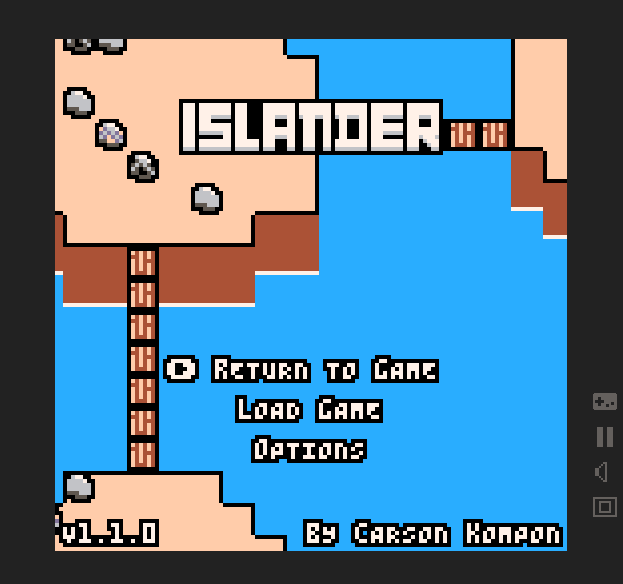 Simple.. Just hold down X and then click the up arrow to craft. Then you can make a workbench and then place it down by clicking Z and open the workbench by clicking X

nevermind i figured it out

I downloaded the game yesterday and today I finished the first level of the game. Thank You again!!

I am playing this game for hours now on the web version. Unfortunately, the game got stuck and now I can't play it on the web again unless I reload the page. And reloading will remove my progress. But it is ok, I will download the game now and then I will save my game by using the method KilluaSama had told. Thank You! This is an amazing game!!!

this game was super fun and relaxing

The save and load mechanic doesn't work for me

It works in the downloaded version. Make sure to save the string which you get in your clipboard so that next time you can paste the string into the game and not something else.

uhh i did ctrl c like a few times anddd 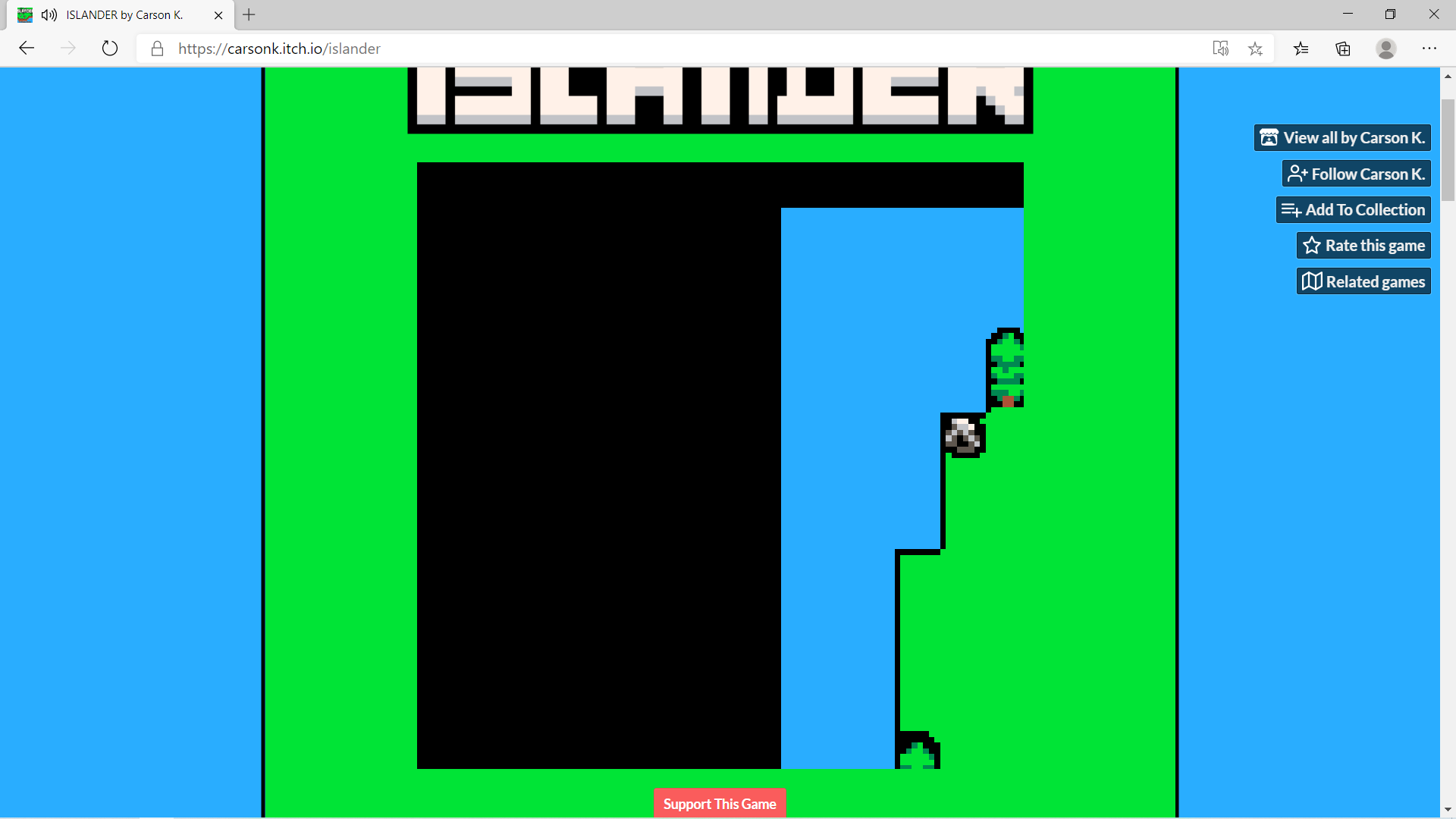